If you are NOT a photographer, you probably have said something like, "I don't know what makes some photographs better than others, but I know when I see one I like."

Well, there are a lot of different factors that go into making a good photographic image, but one of those is the composition -- i.e. where the various elements of the image are placed within the frame of the image.  There are various composition "rules" that have been developed over time.  These are compositions that we know are pleasing to the eye.  One of these is called "The Rule of Thirds."

The Rule of Thirds is fairly simple.  If you divide the image into thirds both horizontally and vertically, the most important elements of the image should be placed along those lines.  And the most powerful position is where the horizontal and vertical lines intersect.

Every month a group of professional pet photographers, assembling in a Facebook group called "Hair of the Dog," has a photo competition based on a different theme.  The Top 10 entries are selected from 100s of entries worldwide.  The December theme was "Rule of Thirds" and, as you've probably surmised by now, an image from yours truly was selected as one of the Top 10. 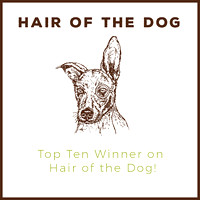 Here's the image, with the imaginary "Rule of Thirds" super-imposed upon it. 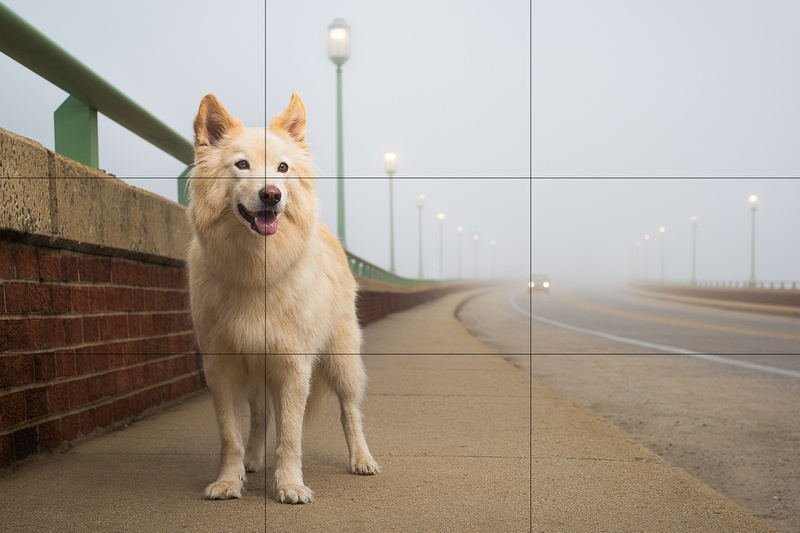 As you can see, Griffin is positioned along the line indicating the lefthand third and, most important, his face is at the intersection of the horizontal and vertical lines in the upper left.  This makes his face the most powerful element in the image and draws the viewers eye immediately.  Now look at the car; it too is positioned along one of these lines but not in as strong a position as Griffin's face.  These composition factors really help make this a successful image.  Other factors include the "leading lines" (the lines formed by the wall that lead your eye to the subject), the receding clarity (the fog in the background compared to the sharpness of the details in Griffin's face), and something we call "negative space" (the large area in the upper right that has been allowed to be left blank).

When I do a shoot for a client, I'm blocking out all of this in my mind as we shoot.  And again, during the selection consultation, I may play with the cropping of an image while explaining to the client why one crop works better than another.  This is the sort of expertise and service you'll get from me.  And this is what you should expect from any professional photographer you decide to hire.

Lastly, while these "rules" of photography will generally improve an image, any experienced photographer will tell you that there are times when it's best to break the rules.  There are simply some images that are so powerful on their own that they shatter the need to follow any rules.  The key is to know when you have such an image.