Call Me When the Weather Gets Nasty

I love inclement weather for photo sessions!  Some of my most dramatic and memorable images are due to a weather forecast that is something less than "sunny and blue skies."  I pride myself in making the effort to get outdoors and make images when one's natural instinct is to grab a favorite beverage and relax in front of the fire or television.

That was the case on Christmas day, 2015.  The temperature was mild, but otherwise it was a dreary day.  Given the weather and the spirit of the day, it would have been perfectly acceptable to sit in the house, enjoy my wife's holiday cooking, grab a beer and watch some football.  Instead, I forced myself to load the gear into the car, brush Griffin, and head out.  I was pleasantly surprised to learn that there was much more fog near the water than there was at our house.  Suddenly, I was excited about making some images.

We "played" with the Academy Bridge, which connects Annapolis and the Naval Academy with the Broadneck peninsula, using it's sweeping curves and receding light poles that faded into the fog to create an interesting sense of perspective.  At first, we were on the bridge where the sight of lightstands and a dog that poses was catching the eye of every passerby (lots of runners and cyclist out taking advantage of the warm temperature).  Then we headed under the bridge.  It was there that I decided to use a lighting technique that enables the photographer to "kill" the ambient light, while maintaining a proper exposure on the subject.  When taken to its extreme, this technique can literally turn day into night.  The result is this image, made at 1:30pm.  Except for some minor tweaking and cropping, this image is essentially SOOC (straight out of camera). 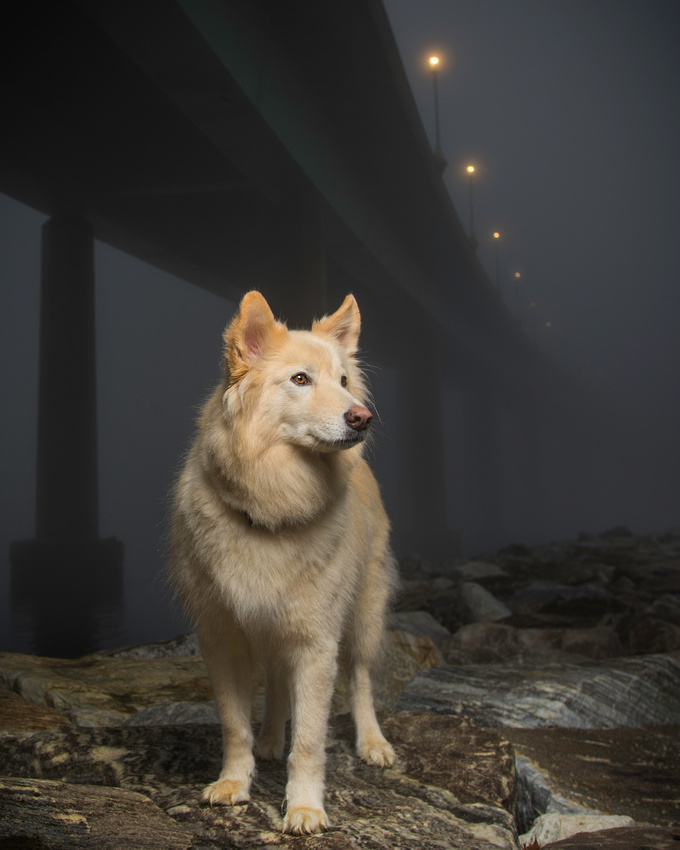 Because of my efforts, I now have an image of Griffin that is unlike any other, and certainly much different from a typical pet portrait.  Unfortunately, photo sessions like this can't be planned in advance with a client, but it does suggest that if the day you've scheduled for your photo session is less than "perfect," don't fret.  A good photographer can use that to your advantage.

I've always thought it would be possible to have clients that want to be on a "dramatic weather call list."  These would be people who are local and would love to have an equally dramatic portrait of their dog and/or family members.  They'd be willing and able to drop what they're doing when the situation presents itself and head out for a very special photo session.  What do you think?  Would it work?

If you're reading this and are in the Annapolis area, please let me know if you'd like to be on such a call list.