Woody Allen once said, "80% of success is showing up."  Similarly, I saw a print ad for Volvo today with the headline, "Great stories never begin: Well, we decided to stay at home and..."  Those sentiments are true, to a large degree, for photographers.  If we're not out there with our cameras, nothing good is likely to happen.

I remind myself this whenever I'm hesitating to load the car with gear and head out for the chance that the sunset will be dramatic and I'll be there to capture something special.  You see, my studio gear and the gear I use for location sessions is one in the same.  So to capture the type of images I want (and am becoming known for), I literally have to break down my studio, back it up, load it into the car, drive, unload, set up, do the shoot, put it all back in the car, then unload and set up my studio again when I return home.  In short, it's a pain in the you-know-what.

But, had I not fought that urge to be lazy and made the effort instead last Wednesday evening, I would have missed the opportunity to make this image: 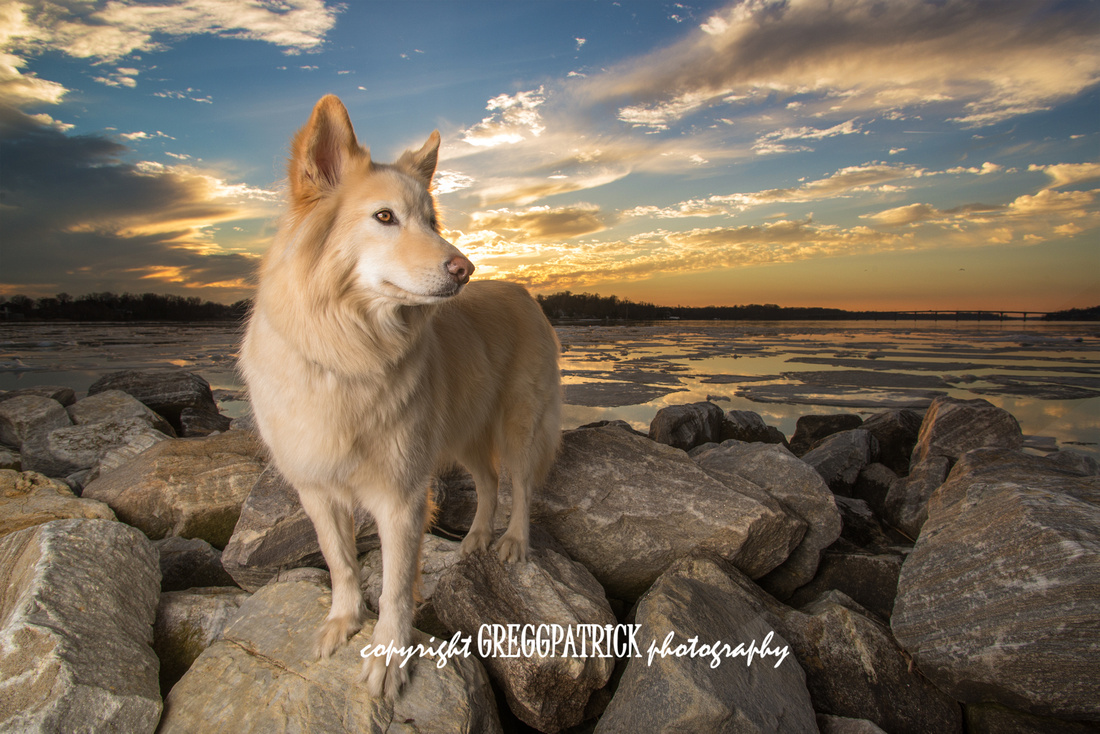 If you've followed my photography at all, you know that I must have thousands of images of my own dog.  And I do.  Still, I'm ecstatic over this particular one.  Everything came together beautifully in this -- the sunset colors, the clouds, the ice flow, Griffin's pose and, of course, the lighting/exposure.  There's a good chance I will NEVER have the opportunity to make a similar image again.  In fact, I drove by the very next evening and noticed that the ice flow was completely gone.  It had either been blown out of the river or had melted.  Either way, a mere 24 hours later and an important element of this image was gone.

Admittedly, it took a little more than just "showing up" to get this image.  But that's the starting point.  Only after that does one's talent and craft have an opportunity to go to work.

I had a similar, but slightly different experience the very next evening.  Excited by the outcome on Wednesday evening, I made the effort again on Thursday.  Without a paying client, I took Griffin as my model and planned to just experiment with some different things.  As a result, I was there, on the dock of the St. John's boathouse overlooking College Creek when this developed. 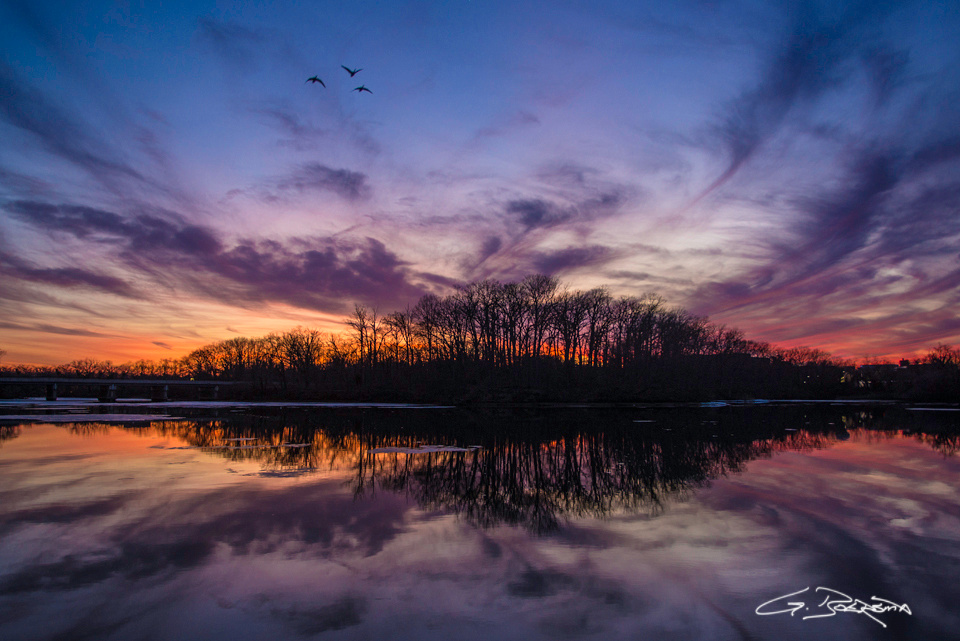 Had I been satisfied with the what is arguably one of the best images I've ever made of Griffin on the previous night, I would have missed this.  Even if I had been sitting at home and seen this sunset developing, it would have been over by the time I got to this or any other good spot.  And yet, "just show up" isn't the only lesson this image reminds me to heed.  I was there intent on capturing another great image of Griffin and I can easily become myopic in the pursuit of an image like that.  So, believe it or not, it did not come naturally to me to say to myself, "to hell with the dog, capture this sunset!"  But I was able to recognize that just in time on this particular evening.  If it had taken me just a few seconds more to come to this realization, I would have missed the ducks that flew perfectly into frame.  Lesson #2:  "Don't get hung up on The Plan."

I used to do a lot of landscape photography but haven't done so in years.  And I rarely shoot anything these days without adding my own light.  So this is quiet a variation from my norm these days, but I'm delighted to have captured this image and be able to share it with friends.

So there you have it:  get off the couch and just show up somewhere.  There's a very good chance it'll lead to success of some sort...well, an 80% chance anyway, if you believe Woody Allen.

Chris Smith(non-registered)
Good point. And I think just showing up applies to many other types of creativity, marketing, meeting people you're meant to get to know, and on, and on.