Giving Back (in a New Way)

Those of you who know me personally or follow my work closely will know that I am a proud member of HeARTs Speak, a group of artist that donate their time/talent to help homeless animals find homes.  (In fact, it was through HeARTs Speak that the Petco Foundation recently discovered my work and selected me to be one of just 14 pet photographers nationwide to create images for their 2016 fundraising calendar.)  This past weekend I had the good fortune of being able to give back in a very different manner, although it undoubtedly included someone who spoke from the heart.

I spent this past weekend in NYC with my daughter, Chelsea.  We had plans to see a Broadway show on Saturday evening and had spent most of that afternoon in lower Manhattan.  Among other things, we visited the 9/11 Memorial.  I was working in New York on that September day and remember the events of the day vividly.  As we walked the grounds of the memorial Chelsea recounted a friend’s father that never returned home that evening.  There were so many families that were shattered that day and, fortunately, ours was not.  Needless to say, I’m extremely thankful for that and as I made a few images at the memorial, I felt sadness for each of the names I read.  We learned from a passing tour guide that the white roses are inserted by volunteers into an individual’s name on their birthday. 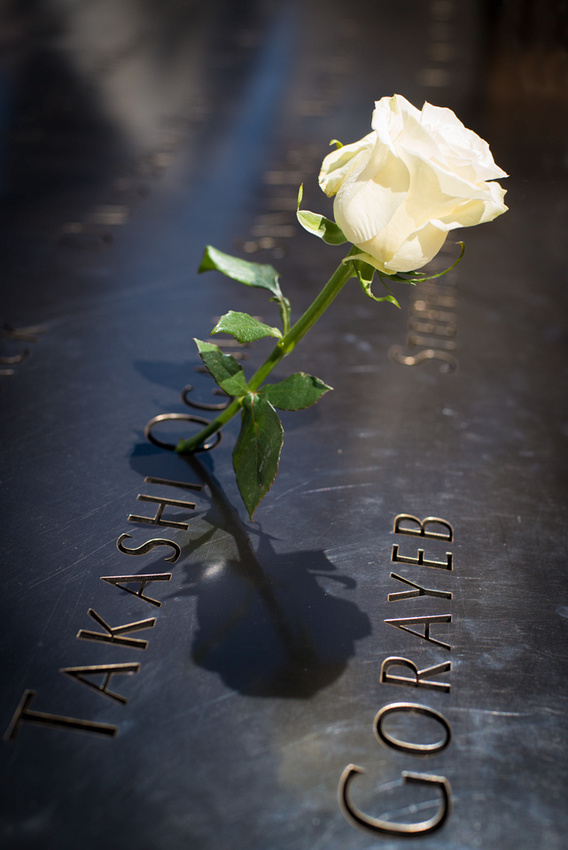 We walked through the financial district some and then caught the #4 train uptown and excited at Grand Central Station.  Before leaving the subway, we spotted a young boy playing an electric keyboard, with his father/agent standing nearby.  Naturally, I took a few pictures – significant only because it caused me to take my camera gear out and enabled what happened next to happen.

As we strolled through Grand Central on our way to dinner in the theater district, Chelsea suddenly said, “Hey, that guy just proposed!”

“That couple over there,” she said as she pointed me in the right direction.

The absolute first thing that came to my mind was I want to capture this for them.  There was no time to make any camera adjustments or lens selection; I just started pressing the shutter.  I was using a Nikkor 105DC F/2 on my D600 and the camera was set to aperture-priority.  I checked the first image on the screen…dark...so I popped the flash.  In the end the exposure was f/2 @ 1/60th; ISO was 640. Not ideal, a little slow, I had to make some adjustments in Lightroom (fortunately I was shooting RAW files), but it worked.

The guy (his name is Tim I would learn later) had already risen from his knee, but I was able to capture the couple’s immediate reaction to his proposal – the excitement, surprise, disbelief, joy and, yes, the love.  She (Amanda) had obviously said “YES!” 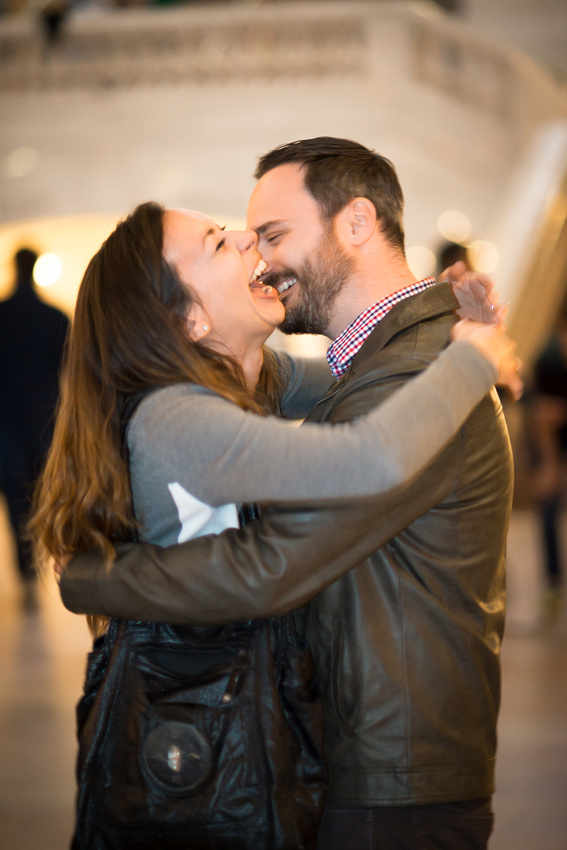 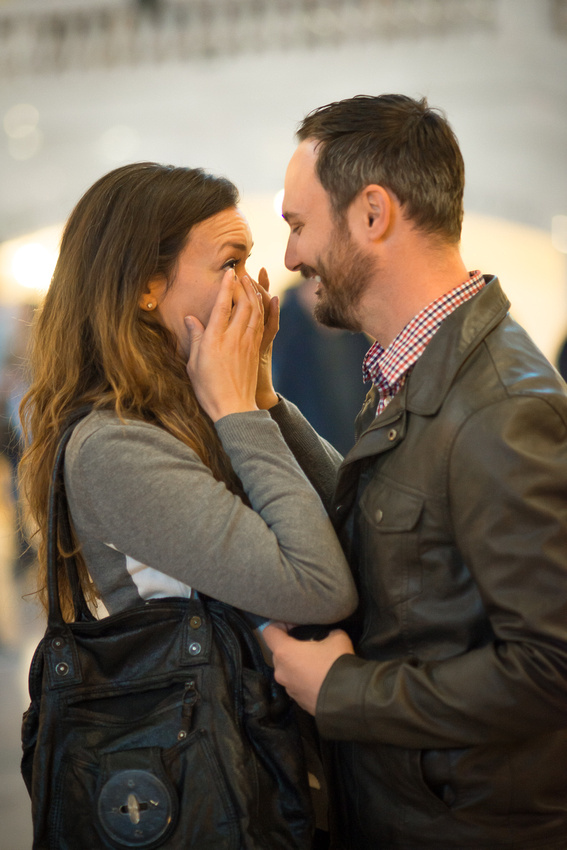 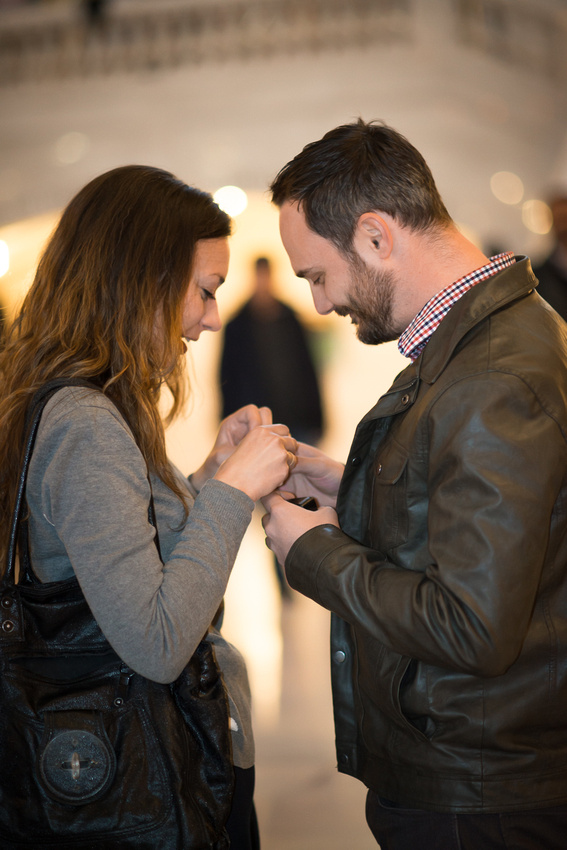 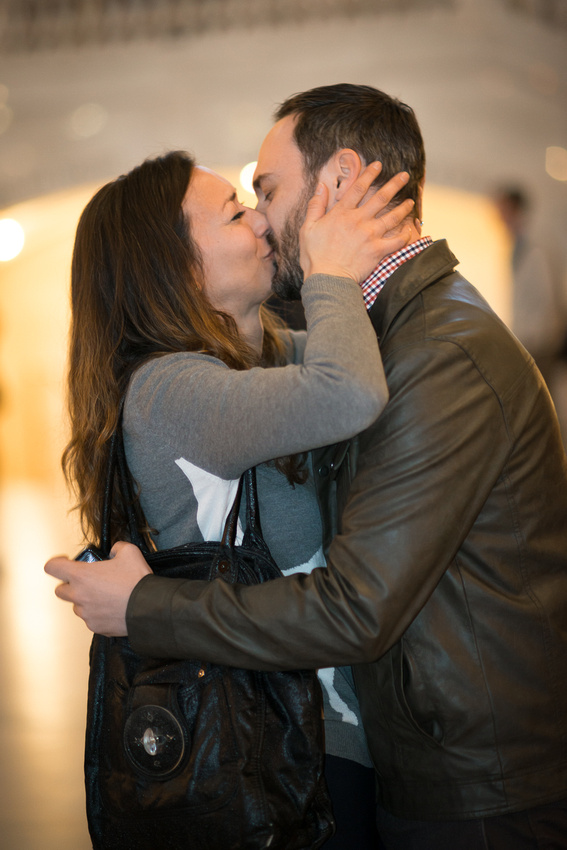 I asked them for just one “posed” portrait, then handed them my business card and let them know I’d be happy to share what I had captured.  There are professional photographers that specialize in capturing such surprise proposals, but Tim had not arranged that.

I’ve since learned that Grand Central Station has always been one of Amanda’s favorite places.  Conversely, despite the fact that he is from Long Island, Tim had never been to GCS until he started dating Amanda more than a year ago and she took him there.  Tim thought that since so many people start a journey from Grand Central, it was a fitting place to start their own.

I’ve spent the last two years developing a photography business with paying customers, but I couldn’t be happier to give Tim and Amanda these images.  They have told me they feel incredibly fortunate that I was there to capture this very special moment in their lives, but I feel equally fortunate to have been able to capture what will ultimately be great memories for these two people.  The satisfaction I feel to be able to provide something so rare, so special, so irreplaceable, is hard to describe.

This is one of those stories that causes me to wonder, “what if?”  What if we hadn’t caught that train uptown?  What if we hadn’t stopped to watch and photograph that boy playing in the subway.  What if Tim had hesitated and proposed a minute later?  What if Chelsea had been looking in another direction and missed the proposal altogether?  I am hoping that the luck that caused all these elements to come together and put me in the right place at the right time is an omen of good things for Tim and Amanda in the future.

For me this experience this serves as a reminder that life in New York moves on after 9/11 in some very positive ways.  Although I’ve pledged never to forget the tragedy of 9/11/2001, I will also always remember the joy I saw in NYC on 4/26/2015.  Thank you Tim and Amanda.  Wishing you a long and very happy journey together!